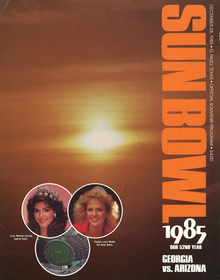 A then record sellout crowd of 50,203 was on hand to witness Georgia and Arizona, who were six-point underdogs, wrangle for a Sun Bowl title.

Arizona made its first bowl appearance in six years. Georgia’s Vince Dooley brought his third Bulldog team to El Paso, fresh off a huge victory over No. 1 Florida during the final game of the regular season.

The game turned into a defensive struggle that climaxed with a missed Max Zendejas 39-yard field goal with only 10 seconds remaining in the game that could have won the game for Arizona.

Ironically, Zendejas was named the game’s Most Valuable Player, becoming only the second kicker to ever receive the honor. Georgia center Peter Anderson, an All-America selection, was named the Most Valuable Lineman – a rare occurrence for an offensive lineman.

Georgia’s Steve Crumley booted a 37-yard field goal to put the Bulldogs up first. Then, an illegal procedure call nullified a David Adams touchdown and the Wildcats were forced to settle for a 22-yard field goal by Zendejas to tie the game before the first half expired.

The opening drive of the third quarter belonged to the Bulldogs who drove 34 yards and capped it off with a Zendejas’ 52-yard field goal.

The Wildcats expanded the margin to 13-3 as Martin Rudolph picked off a James Jackson pass and returned the ball 35 yards for a touchdown.

With 1:14 left to play, Jacobs missed a 44-yarder and the Wildcats regained possession. A 25-yard David Adams run and a 12-yard pass from Alfred Jenkins to Jeff Fairholm set up Zendejas with a 39-yard attempt and just 10 seconds left on the clock. However, his attempt was wide-right and short. The score remained tied as time expired.

Arizona linebacker Byron Evans put on a ferocious defensive performance finishing with a game-high 23 tackles, nine of which unassisted. Bill Mitchell was the leading linebacker for the Bulldogs after recording 10 tackles.

Georgia’s head coach Dooley was inducted into the College Hall of Fame in 1994 and into the Legends of the Sun Bowl in 2000.