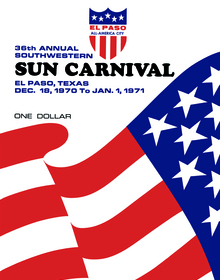 In its first visit to El Paso, No. 13 Georgia Tech (8-3) stunted the offense of No. 19 Texas Tech (8-3) in a 17-9 victory.
The first score of the game was led by the Yellow Jackets senior quarterback, Jack Williams, on an 11-play, 62-yard drive. Bob Healy capped the drive with a two-yard touchdown run.

The Yellow Jackets left the field with a 10-0 lead at halftime following Jack Moore’s 21-yard field goal with 42 seconds left.

Able to only squeeze past midfield once in the entire first half, Texas Tech revived its momentum in the third quarter and put points on the board.

A 50-yard sprint from halfback Larry Hargrave ignited the offense. The drive allowed halfback Doug McCutchen to burst into the endzone and was followed by a successful Dickie Ingram kick to make the score 10-7.

Then, Red Raiders linebacker Donald Rivers blocked a Georgia Tech punt into the endzone for a safety to come within one point of the lead.

Early in the fourth quarter, Texas Tech’s Ingram missed a crucial 26-yard field goal that would have given Texas Tech the lead.

Their next possession had much of the same luck when Flowers recovered a Texas Tech fumble on the Red Raiders 25-yard line. Six plays later, the Yellow Jackets scored on a Kevin McNamara 2-yard touchdown run with 1:44 remaining in the game.

Flowers, credited with eight unassisted tackles in addition to recovering the fumble, was named the game’s most valuable lineman and teammate Rock Perdoni, the All-American defensive tackle who was in on 13 stops, earned the C.M. Hendricks MVP award.

Both coaches agreed the missed field goal was the turning point.