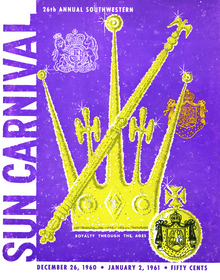 Nationally-ranked No. 17 in the AP poll and No. 19 in the Coaches’ poll, New Mexico State (10-0) entered the game on a 14-game winning streak and fresh off of its Border Conference championship. Utah State came to El Paso with a 9-1 mark, a share of the Skyline Conference title and had been ranked as high as No. 18 nationally.

The Aggies responded with a 3-yard touchdown pass from Johnson to halfback Pervis Atkins.

Utah State was able to regain the lead as Dolph Camilli scored from the 11 just before the first half expired.

The second half belonged to New Mexico State as Bob Gaiters rushed 32 yards for a touchdown and Johnson secured a 7-yard touchdown pass to E.A. Sims. Atkins nailed his second point-after attempt.

The Aggies denied Utah State’s final efforts to score when Doug Mayberry was stopped on a fourth down play. New Mexico State took over and ran out the clock for a 20-13 victory.