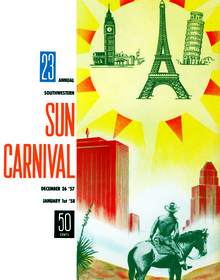 A battle of one-loss teams faced off in the 23rd edition of the Sun Bowl – Louisville (8-1) and Drake (7-1). Louisville strode away with a 34-20 win in its first ever post-season bowl game.

Louisville’s Ken Porco was named the C.M. Hendricks Most Valuable Player after carrying the ball 20 times for 119 yards and one touchdown.

Louisville and Drake traded scores in the first quarter, as both offenses began clicking early.

The Cardinals added a second quarter score, when Ed Young pulled in a 32-yard pass from Dale Orem. It was Orem’s second touchdown pass of the game.

Drake would answer with a nine-play scoring drive capped by a one-yard dive by Tom Newell to tie the game at 14-14.
Louisville would then take over with 21 unanswered points. Porco’s third quarter touchdown run put the game away for the Cardinals and Young pulled in his second TD catch, this time from Pete Bryant.

Drake quarterback Roger LaBrasca threw for 140 yards and touchdown and rushed for another. Halfback Tom Newell added 15 carries for 87 yards and one touchdown.