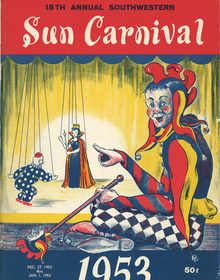 Southern Miss entered the game on a 10-game winning streak, with its only loss coming to Alabama to open the season. But it was Pacific, who was making its second straight trip to El Paso, that seemed poised for victory.

A rugged and alert Pacific defense proved to be the difference in this game.

Three of the four touchdowns that Pacific scored were set up by bone-jarring tackling and blocking. Neither team moved the ball well, but Southern Miss turnovers were the demise of the Eagles.

Pacific halfback Tom McCormick helped the cause, as he set a then-Sun Bowl record with three rushing touchdowns in the game.

The Tigers rushed its way to a 13-0 lead at the half, capitalizing on a pair of Southern Miss turnovers.

Trailing 13-0 at the half, Southern Miss received the kickoff and then fumbled the ball on the very next play, resulting in another Tiger touchdown. Coach Pie Vann’s squad would lose four fumbles on the day. The Eagles’ only score came on a 73-yard march with little time remaining. Hugh Laurin Pepper scored on a two-yard run, and Peanuts Davenport kicked the extra point.

Southern Miss tackle J.T. Shepard was the defensive standout the Eagles. He blocked a punt and recovered it, as well as leading the team with seven tackles. Shepard was named to the 75th Anniversary All-Sun Bowl Team for his efforts.