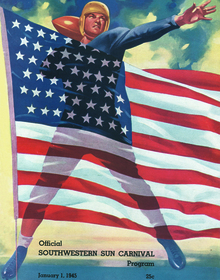 This game was marked by the only appearance of a foreign university in an American college bowl game. The Pumas of the University of Mexico (Universidad Nacional Autónoma de México), the 1944 Mexican national champions, were expected to display a powerful, razzle-dazzle offense while Southwestern’s was extremely conservative. Exactly the opposite occurred.

Initially, the Pumas wee able to control the bigger, quicker Southwestern, halting an initial drive on its own 9-yard line early in the first quarter. However, that would be the only highlight for Mexico.

The superior Southwestern line began to take its toll late in the first quarter, recovering a fumbled punt attempt with 30 seconds to go. E.J. Blodzinsky fell on the blocked punt in the end zone to give Southwestern a 7-0 lead.

Southwestern then used a stifling defense and a pair of long passes to take a 14-0 lead, as Frank Brechtel connected with T.C. Bare on a 24-yard scoring strike.

After that, the conservative Southwestern offense pretty much moved the ball at will for the rest of the game.