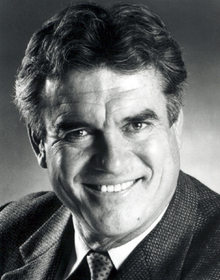 Tom Brookshier is a 1953 graduate of the University of Colorado. He was a backfield coach for two years at the Air Force Academy while serving as a lieutenant in the USAF and later starred for nine years (1953-1961) in the NFL with the Philadelphia Eagles as a defensive back. The Eagles honored him by having his number 40 retired. In 1962 he began his broadcasting career at WCAU radio and television in Philadelphia and subsequently became a football analyst with CBS Sports, working NFL regular season games, Super Bowls VI and XVII, and numerous Blue-Gray, Cotton, Sun, and Pro Bowl games. In 1977 he teamed with Pat Summerall to form the most illustrious Sun Bowl broadcast team ever. Like his celebrated broadcast partner of that era, Brookshier has received numerous athletic, broadcasting, and civic awards. He is enshrined in the University of Colorado Hall of Fame, Pennsylvania’s Hall of Fame, and the Philadelphia Eagles All-Time Honor Role. His awards include the Washington Touchdown Club Outstanding Broadcaster, the Bert Bell Award, Emmy awards for outstanding live sports series and CBS commentator, and the Philadelphia Sportswriters Association.