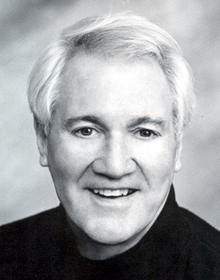 Pat Summerall played football for the University of Arkansas where he received both his bachelor’s and master’s degree. He was drafted by Detroit in 1952 but was traded to the Chicago Cardinals before ever playing for the Lions. He played six years with the Cardinals (1952-1957) before concluding his ten-year NFL career. He played in the 1958, 1959 and 1961 NFL Championship games. As a placekicker and tight end, he scored 567 career points (101 field goals, 258 extra points, and one touchdown). He began his broadcasting career with CBS in 1961. He was the network’s signature voice for its golf coverage, including the Masters, since 1968 and for the U.S. Open Tennis Championships since 1971. The 1994 Masters was his final event for CBS. He teamed up with Tom Brookshier to form the Sun Bowl broadcasting team. Summerall has earned numerous broadcasting awards, including the Lifetime Achievement Award for Sports bestowed by the National Academy of Television Arts and Sciences and the Pro Football Hall of Fame’s Pete Rozelle Radio-Television Award.