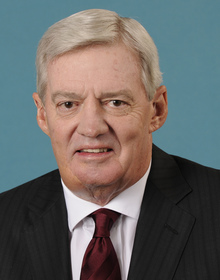 When Frank Beamer accepted the job as head football coach at his alma mater in 1987, his goal was for the Virginia Tech football program to reach a consistent level of excellence. The Hokies have come a long way since then, and, along the way, Beamer has become one of the most respected and successful coaches on the college football scene. Now in his 29th campaign in Blacksburg, Beamer is the winningest active coach in the FBS with 273 career wins.

Under Beamer, Tech football has enjoyed unprecedented success with 22 consecutive bowl appearances, four ACC titles, five ACC Coastal Division crowns, three BIG EAST Conference titles, six BCS appearances, two “major” bowl victories and a trip to the national championship game. Under his guidance, the Hokies have finished in the Top 20 in 16 of the past 22 seasons, including four top-10 finishes during the past 11 years.

The Hokies couldn’t have asked for anyone better to guide their football program into the ACC. In 2004 – Tech’s first season in the league – Beamer and his staff led a young team picked to finish sixth in the league to an ACC title and a BCS Bowl. That team also won the league’s 2004 Fall Sportsmanship Award for football, yet another tribute to the program Beamer and his staff have built. A year later, the Hokies produced an 11-2 record, won the ACC Coastal Division title, earned a spot in the inaugural league championship contest and appeared in a bowl game. Beamer was named the ACC Coach of the Year both seasons.

After the 2006 squad went 10-3 with a bowl appearance, Beamer’s 2007 Tech team won the conference title and played Kansas in the Orange Bowl. Beamer was named the 2007 Southeast Coach of the Year by Sports Unlimited and was a finalist for both the Paul “Bear” Bryant and Eddie Robinson Coach of the Year awards. The Hokies went 11-3 and finished ninth in the final national polls.

The 2008 season may have been Beamer’s finest effort as he took one of the youngest teams in his tenure, played one of the toughest schedules and, despite several setbacks and disappointing losses, led the Hokies to an ACC title and a 20-7 win over Cincinnati in the Orange Bowl. In 2009, the Hokies kept rolling, winning 10 games including an impressive victory over Tennessee in the Chick-fil-A Bowl.

In 2010, after an unexpected 0-2 start, he led Tech to 11 wins, an ACC title and a berth in the Orange Bowl to cap off another impressive season. He was also named the winner of the inaugural Joseph V. Paterno Coach of the Year Award, recognizing Beamer for his team’s performance on the field, in the classroom and in the community.

In 2011, Beamer led the Hokies to 11 wins and an appearance in the ACC championship game after capturing another Coastal Division crown. The Hokies finished with an 11-3 overall mark, including a berth in the Sugar Bowl against Michigan, Tech’s eighth “major” bowl game appearance. In 2012, the Hokies won their final three games, including a victory over Rutgers in the Russell Athletic Bowl, to finish with their 20th-straight winning season and in 2013, Beamer led Tech to a berth in the Sun Bowl after the Hokies won eight games in the regular season.

Beamer, who was the consensus National Coach of the Year in 1999, is the active leader among Division I FBS coaches in victories with 273 wins over 34 seasons as a head coach. Now in his 29th year at the Tech helm, his overall record with the Hokies stands at 231-115-2. He became Tech’s winningest football coach during the 1997 campaign. Counting six years as head coach at Murray State prior to joining the Hokies, Beamer’s overall record is 273-138-4.

Tech won the BIG EAST title in 1995 and 1999 and shared it in ‘96. Beamer was voted BIG EAST Coach of the Year by the league’s coaches each of those seasons. There have been plenty of other accolades for the Hokies’ coach. Prior to the 2005 season, a Seattle Times poll of more than 40 coaches voted Frank Beamer as the current head coach for whom they had the most respect. When BIG EAST Conference football celebrated its first 10 years of existence in 2000, Beamer was voted the Coach of the Decade by the league’s media. In 1997, he was inducted into The Virginia Tech Sports Hall of Fame.

The rise of the Tech football program has made Beamer a man in demand. It has opened doors to places he may never have dreamed of as a youngster growing up in Southwest Virginia.

In September 2000, Beamer was invited to the White House where he joined a select group that stood in the Rose Garden behind then-President Bill Clinton as he made remarks on the Conservation and Reinvestment Act. Beamer was one of the keynote speakers at the American Football Coaches Association Convention in 2000; and, in April 2001, he joined former Prime Minister of Great Britain Lady Margaret Thatcher as one of the featured speakers at SUCCESS 2001, one of the nation’s most popular business seminars.

In April 2004, Beamer was presented with a Humanitarian Award by the National Conference for Community and Justice for his contributions to fostering justice, equity and community in the Roanoke Valley. An avid NASCAR fan, Beamer has been the official starter for races at Bristol Motor Speedway and Richmond International Raceway.

In 1990, Beamer received a new contract and a substantial pay raise. He refused the raise, however, until a time that all classified and faculty employees of the university could have the same opportunity for pay raises. Most state salaries had been frozen at the time. When offered a pay increase in 2006, he did not sign the agreement until his assistant coaches were taken care of first.

Another indication of Beamer’s love for the university came on the night he was inducted into The Virginia Tech Sports Hall of Fame. He called it the biggest honor of his entire career. With the induction, he became the first active coach at the university to be honored in that fashion.

The 68-year-old Beamer, the first alumnus to guide the Hokies since the 1940s, took over the Tech reins from Bill Dooley in January 1987. He began work a few days after the Hokies had beaten North Carolina State in the Peach Bowl. It took a while for him to get the Hokies moving in the right direction because the football program was hit with NCAA sanctions at the time.

The Tech teams in 1995 and 1996 were among the best in school history. The 1995 team swept the BIG EAST Conference championship outright, and the 1996 club tied for the title with Syracuse and Miami.

The 1995 team was 9-2 during the regular season and then came up with a stirring 28-10 victory over Texas in the Sugar Bowl. The 1996 team went 10-1 during the regular season and lost to powerful Nebraska, 41-21, in the Orange Bowl after giving the Cornhuskers a fierce battle for three quarters. The Hokies fell to 7-5 in 1997 and were beaten badly by North Carolina in the Gator Bowl, 42-3. But they came right back with a 9-3 mark in 1998 that included an impressive 38-7 victory over Alabama in the inaugural Music City Bowl in Nashville, Tenn.

The two winningest seasons in school history followed in 1999 and 2000 with the Hokies posting back-to-back 11-1 records. Tech registered its first-ever 11-0 regular-season record in ’99 before losing its national championship battle with FSU.

During the 2003 season, the Hokies ended No. 2 Miami’s 39-game regular-season winning streak with a 31-7 victory. The ’Canes were the highest-ranked opponent Tech had ever beaten on the gridiron. The Hokies climbed as high as No. 3 in the polls before falling victim to inconsistent play during the final month of the season. Still, Tech earned eight wins for the 10th time in 11 seasons.

The 2004 season saw the Hokies bounce back to win their last eight games of the regular season, including victories against three nationally ranked teams – No. 6 West Virginia, No. 16 Virginia and No. 9 Miami.

Beamer’s early Tech teams also registered many exciting victories. One of the most impressive came in 1990 when the Hokies capped the year with a 38-13 victory over arch-rival Virginia. During the 1989 season, Tech knocked off ninth-ranked West Virginia, 12-10, in Morgantown.

During his undergraduate days at Tech, Beamer started three years as a cornerback and played on the Hokies’ 1966 and 1968 Liberty Bowl teams. He received a B.S. in distributive education from Tech in 1969 and a master’s in guidance from Radford in 1972. Then came the start of the Beamer coaching career.

He began as an assistant at Radford High School from 1969 through 1971. Then, after one season as a graduate assistant at the University of Maryland, he went to The Citadel where he worked five seasons under Bobby Ross and one year under Art Baker. His last two years at The Citadel, Beamer was the defensive coordinator. In 1979, he went to Murray State as the defensive coordinator under Mike Gottfried. He was named head coach at MSU in 1981 and went on to compile a six-year record of 42-23-2. The Tech coach was born in Mt. Airy, North Carolina, and grew up in Hillsville, Virginia. At Hillsville High, he earned 11 varsity letters as a three-sport athlete in football, basketball and baseball.

Beamer is married to the former Cheryl Oakley of Richmond, Virginia. They have two children, Shane, a former member of his dad’s football team at Tech and now the associate head coach at Virginia Tech; and daughter Casey, a 2003 graduate of Tech. He has two granddaughters, Sutton and Olivia, and a grandson, Hunter, children of Shane and his wife, Emily. He also has a grandson, Hudson, son of Casey and her husband, Canaan.