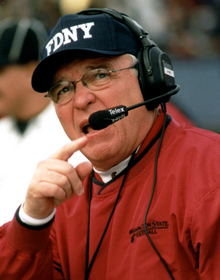 Selected as the 2001 Pac-10 Coach of the Year after finishing second in conference standings, Mike Price led the Washington State Cougars to a 33-27 win over Purdue at the Sun Bowl game. After giving up a touchdown and allowing an onside kick that pulled the Boilermakers within six points, the Washington State defense forced Purdue to turn the ball over on downs with 1:17 left to play in the game. The win catapulted the Cougars to a No. 10 ranking in the AP and Coaches’ polls finishing 10-2 for the season. Price and his Cougars finished the 2002 season with a bid to the Rose Bowl as Pac-10 Co-Champions and a 10-3 record.