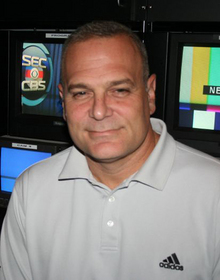 Craig Silver is not a face that you have seen on a broadcast of the Hyundai Sun Bowl, but he has definitely been a part of the success of the game for more than two decades. This year will mark the 19th time that Silver has come to El Paso on behalf of CBS and has worked as either the producer or coordinating producer of 21 Sun Bowl games. Surprisingly, he has been a part of over half of the CBS broadcasts of the game that first began in 1968. The 43-year relationship between the Hyundai Sun Bowl and CBS is the longest-running partnership in the nation between a college bowl game and a television network. It is also the second-longest running sporting event televised on CBS, next to only The Masters. For his effort and dedication, Craig Silver has been named a 2008 Legend of the Sun Bowl. The Legends of the Sun Bowl was started in 1994 as a way to give back to those who have contributed to the Hyundai Sun Bowl and college football in general. He is the 26th inductee into this exclusive group. Silver, whose career at CBS Sports started in 1981, has served as coordinating producer of college football for CBS for the last 13 years. Two years after his arrival at the network, he came to the Sun City to work his first Sun Bowl game, as Alabama stunned No. 6 SMU, 28-7 on a very cold and frigid day. During his 26-year career with the network, Silver has won four national sports Emmy Awards and produced three Winter Olympic broadcasts on CBS. He has also produced several NCAA basketball tournament broadcasts, including the 1992 NCAA East Regional final between Duke and Kentucky, when Christian Laettner hit the buzzer-beater to lift the Blue Devils over the Wildcats to advance to the Final Four. He also served as a coordinating producer of the NBA on TNT from 1989-90. Silver and his wife Rosanne are the proud parents of Jak (pronounced Jack), 12, and Lina, 10.