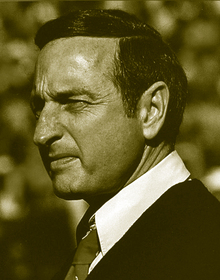 College Hall of Fame football coach Vince Dooley led three teams to the Sun Bowl during his extensive coaching career at Georgia. The Bulldogs and Dooley are 1-1-1 in the Sun Bowl: Dec. 26, 1964 (Georgia 7, Texas Tech 0); Dec. 20, 1969 (Nebraska 45, Georgia 6); Dec. 28, 1985 (Georgia 13, Arizona 13). In 25 seasons, Dooley led his teams to 20 bowl games, six Southeastern Conference Championships and one national championship. He compiled 201 victories, for which he ranked third in the nation among active coaches at the time of his retirement. He has served as Georgia athletic director since 1979. Georgia placed second in the 1998-99 Sears Directors Cup competition, which recognizes the top athletic programs in the nation each year. During his role as athletic director, Georgia teams have won 15 national championships and 64 SEC team championships. Dooley was a standout football and basketball player at Auburn, from which he earned his bachelor’s degree in business management and master’s degree in history. He became head coach of the Georgia Bulldogs in December 1963 at the age of 31 after serving in the Marines and as an assistant coach at Auburn.