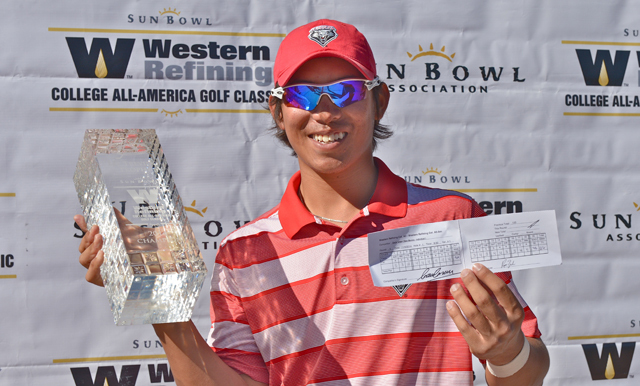 In 40 years, only a single champion of the Sun Bowl Western Refining College All-America Golf Classic held bragging rights as the only participant with multiple victories. On Sunday afternoon, University of New Mexico senior Gavin Green rewrote the history of the event becoming the second champion with back-to-back victories in the distinguished tournament.

“Today was a good day,” said Green. “I got off to a decent start but Rico (Hoey) pulled tied with me after one. I forgot about it and just moved on and played my game. I made some putts and that’s what it took to finish first.”

The Kuala Lumpur, Selangor, native, finished 14-under, seven strokes ahead of second-place finishers Jonathan Garrick (UCLA) and Rico Hoey (USC) to receive his second Lee Trevino trophy at the El Paso Country Club. Green carded a 66 in the final round following scores of 71 and 62 in the first two rounds on Saturday.

Green began his day with bogey on one, he immediately bounced back with a pair of birdies on two and three. Garrick and Hoey appeared to threaten Green’s quest for the repeat at times, but the 2014 Mountain West Conference Player of the Year carried over the momentum from Saturday’s finish to pull away with the win.

“It’s an awesome feeling for me to be able to say that, with all the big names that have won this tournament, I was able to do it twice.” Green added.

Clemson’s Chris Patton is the only other player to have accomplished the repeat feat at the All-American Classic with wins in 1988 and 1989.