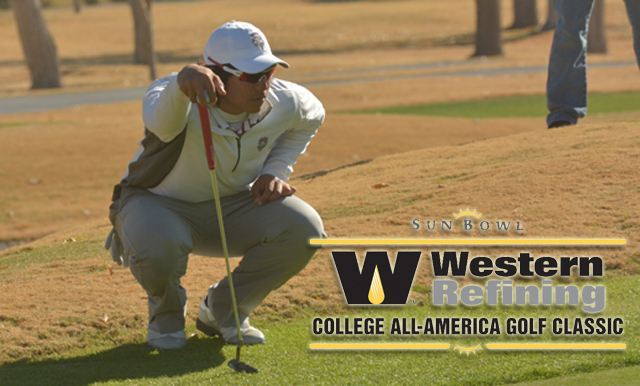 Twenty of the nation’s top collegiate golfers will make their way to El Paso to compete in the 40th edition of the Sun Bowl Western Refining College All-America Golf Classic beginning Friday, Nov. 6, at the El Paso Country Club.

“Western is proud to again team with the Sun Bowl Association to welcome the most elite college golfers in the country to El Paso,” said Jeff Stevens, President and CEO of Western Refining. “For 40 years, this tournament has brought the best college golfers to our city. The alumni of this tournament are now the legends of the PGA Tour and this week El Pasoans will have the chance to see the future legends of golf perform here at El Paso Country Club.”

The 2014 field of All-Americans includes 14 of the top 100 amateur golfers in the world, according to the World Amateur Golf Rankings including third-ranked amateur Robby Shelton. The Alabama sophomore was tabbed the Southeastern Conference Player and Freshman of the Year en route to being named the 2014 National Freshman of the Year.

Alumni of the Golf Classic have gone on to earn more than $1.7 billion and win 634 events on the PGA Tour. In all, 145 colleges and universities have participated in the tournament, raising $753,000 in scholarship money for the participating institutions.

Each university represented by the Western Refining College All-Americans will receive a $1,000 scholarship.

Festivities will begin on Friday, Nov. 7, at 9 a.m. with the Titleist Long Drive and PING Putting contests at the El Paso Country Club. The first two rounds will be played on Saturday, Nov. 8, beginning at 8 a.m. The final round is scheduled to start at 8 a.m. on Sunday. The event is open and free to the public.

Trevor Cone
Virginia Tech • Senior
Selected to the 2014 All-Atlantic Coast Conference First Team and the All-East Region … claimed back-to-back victories at the Mission Inn Spring Spectacular and the Furman Intercollegiate as a junior … took runner-up honors at the Navy Spring Invitational in 2013 … named to the 2012 PING All-East Region Team, the All-ACC Academic Men’s Golf Team and the ACC Academic Honor Roll … qualified for the 2013 U.S. Amateur … advanced to the round of 32 at the 2013 U.S. Amateur Public Links Championship … runner-up at the 2013 North Carolina Amateur.

Bryson Dechambeau
SMU • Junior
Garnered PING All-Central Region accolades as a freshman and sophomore … took medalist honors at the American Athletic Conference Championships … tied for ninth during stroke play at the NCAA Championships … runner-up at the National Invitational Tournament … finished third at the Fighting Illini Invitational, the Erin Hill Intercollegiate and the Gifford Collegiate … took runner-up honors at the 2013 Conference USA Championships as a freshman … named the C-USA Freshman of the Year … member of the 2014 United States Palmer Cup team … selected for Team USA at the World Amateur Team Championships … advanced to the round of 16 at the 2014 U.S. Amateur and quarterfinals of match play at the U.S. Amateur Public Links … won the 2013 Trans-Mississippi Championship and the U.S. Amateur Qualifier … 13th in the Golfweek/Sagarin Rankings.

Grant Forrest
San Diego • Senior
Selected the West Coast Conference Player of the Year following a first-place finish at the 2014 WCC Championships … a three-time All-WCC team honoree … tabbed a 2014 Academic All-American … winner at the 2014 The Farms Invitational and the Redhawk Invitational … named a 2014 Cleveland Golf/Srixon All-American Scholar … finished first at the 2013 St. Mary’s Invitational … part of the 2013 WCC All-Academic Squad … honored as the WCC Freshman of the Year … represented Scotland in the 2014 World Amateur Championships … competed for Team Europe in the 2014 Palmer Cup … took first at the 2014 St. Andrews Links Trophy … finished first at the Scottish Amateur Championship in 2012 … 23rd in the World Amateur Golf Rankings.

Jonathan Garrick
UCLA • Junior
Earned Second-Team All-Pac-12 honors as a sophomore … tied for second at the 2014 Southern Highlands Collegiate Masters … making second-consecutive appearance at All-American Classic following honorable mention All-American accolades as a freshman … selected to the 2013 All-Pac-12 Freshman Team … winner at the Cal Poly Invitational in 2012 … tied for third at the 2013 Pac-12 Championships … tied for second at the 2013 NCAA West Regional … finished tied for first at the 2014 Canadian Amateur … two-time U.S. Amateur Round of 32 participant … tied for fifth at the Southern Amateur … reached the Sweet 16 at the Western Amateur.

Gavin Green
UNM • Senior
Returning to the Sun Bowl Western Refining College All-America Classic to defend his 2013 title … tabbed the 2014 Mountain West Conference Player of the Year … a two-time PING All-West Region selection and MWC First Team honoree … winner at the 2014 Mountain West Conference Championships and the Lone Star Invitational … defended back-to-back wins at the William H. Tucker Intercollegiate with a third-consecutive win in 2014 … as a sophomore finished third at the MWC Championships and tied for second at the PING Golfweek Preview … became the first amateur to win an event on the Asian Development Tour following a top finish at the PGM Vacory Templer Park Championship … won the 2012 Malaysian Amateur Open … 18th in the World Amateur Golf Rankings.

Rico Hoey
USC • Sophomore
Tabbed the 2014 Pac-12 Freshman of the Year selected to the 2014 All-West Region, All-Pac-12 and Pac-12 All-Freshman first team honors … won the 2014 Gifford Collegiate … took second at The Goodwin and the San Diego Classic as a freshman … tied for third at the Western Intercollegiate and fourth at the U.S. Collegiate Championships … member of the 2014 Palmer Cup … finished first at the North & South … co-medalist at the 2014 U.S. Public Links … tied for fourth at the 2014 Sunnehanna Tournament … 30th on the World Amateur Golf Rankings.

Chase Koepka
South Florida • Junior
Selected to the 2014 Southeast All-Region Team … medalist at the Kiawah Invitational … took second at the 2014 American Conference Championships … tabbed the 2013 BIG EAST Player of the Year and Freshman of the Year … finished second at the 2013 BIG EAST Championships … winner at the Reed Jones Invitational and AutoTrader.com Invitational in 2013 … earned BIG EAST Academic All-Conference honors in 2013 … finished third at the Players Amateur, fourth at the Rice Planters Amateur and reached the Round of 32 at the U.S. Amateur in 2013.

Robby Shelton
Alabama • Sophomore
2014 National Freshman of the Year … named the 2014 Southeastern Conference Player of the Year and Freshman of the Year … member of the All-SEC First Team… finished tied for third at the NCAA Championships as a freshman … also finished third at the SEC Championship … won the Olympia Fields Fighting Illini Invitational and the Puerto Rico Classic … took co-medalist honors at the Olympia Fields Fighting Illini Invitational … tied for first at the Linger Longer Invitational … finished third at the SMU Querencia Cab Collegiate … participated in the 2014 Palmer Cup … qualified for the 2014 U.S. Open … third in the World Amateur Golf Rankings.